Last night I went to the opening of a fabulous new exhibtion at St. Mary’s Episcopal Cathedral, Edinburgh. 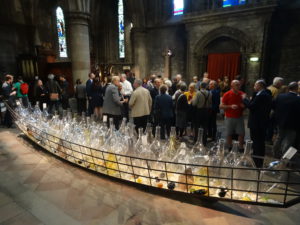 An installation of works by renowned international glass artists Monica Guggisberg & Philip Baldwin will be exhibited at St. Mary’s Cathedral during the Edinburgh Festival, and curated by Gallery TEN’s Paul Musgrove. Their modern, minimalist aesthetic provides a dramatic juxtaposition against the backdrop of St. Mary’s ornate Gothic architecture. The Cathedral Collection will include new works from their frames series, mobiles, and large scale boat sculptures, including a nine meter long version recently exhibited at the Grand Palais in Paris, and the Applied Arts Museum in Frankfurt.
http://baldwinguggisberg.com/cathedral-collection

The work is beautifully made and sensitively placed. One is both startled by its fragility and boldness, its beauty and  unexpectedness. This contemporary work surprisingly brings to life the dark gothic cathedral, whose historical and spiritual architectural canvas adds layers of meaning as countless metaphors are suggested by Guggisberg and Baldwin’s glass and metal boats and vessels.

If you are in or around Edinburgh during the festival – go and see for yourself. 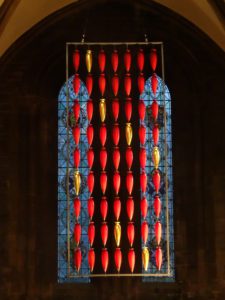